There are thirty two islands in the Sound of Harris nearly all uninhabited but each offering something quite unique. With no regular services to these islands we hopped into our sea kayaks to tackle the shallow waters and bagged the high point on every island between Leverburgh, South Harris to Lochmaddy, North Uist. Berneray with its 3 miles stretch of wild, white sand beach was stunning, with the best views of it from the summit of Beinn Shleibe (93m).

Moving south to North Uist and its highpoint, Eaval at 347 metres, there was also plenty of time to watch the short eared owls hunt during the day and have a quick catch up with the locals at fabulous Westford Inn. An epic tidal crossing over to the deserted island of Vallay (33m), then south to Benbecula and Baleshare – the latter being so flat that it has no contour lines on an OS map. Bagging all of the islands in between we kayaked out to the Monach Isles, five small islands, off the west coast of North Uist. This low lying group of islands with undisturbed machair, rare carpet flowers and about 10,000 breeding grey seals – one of the largest such colonies in the world.

We travelled along the Hebridean Way down to South Uist, with a quick scoot up Beinn Mhor (620m) for great views across to Skye – thought we could see Katie, our new team member, checking our route up to Sgurr Alasdair. Was that the sparkle of her shoes on the ridgeline?

We had heard a lot about the wildlife on Eriskay – minke whales, golden and white-tailed eagles and the elusive Eriskay pony and when we summited on Beinn Scrien (186m) we saw the lot, followed by a whale when we rounded Caolas an Stac. Derek wanted to visit the Am Politician as he was still intrigued how so many bottles of whiskey rescued from the shipwreck in 1941 quite simply disappeared when the custom and excise men came to recover them.

We continued south and bagged Barra, Heaval at 383m, and on the way to Vatersay (190m) we stopped off at Café Kisimul for a massive plate of scallop pakoras. Then on south to the Bishop Isles to bag the other islands including Mingulay (273m), the Hebridean island wiped out by the plague. The story goes that when a boy was sent there to check the condition of the islanders, he found the people all dead in their homes – and he was forbidden to leave given fears that he may have contracted the disease. After surviving on sheep that he killed with his pocket knife, he was to go on and rebuild the island, with the land given free to his father to compensate for not letting the boy home.

We travelled back to Stornaway for the CalMac to Uig on Skye and decided to tackle the Small Isles first. Now walking on Rum is up there with the best but climbing Askival (812 m), the high point of the spectacular Rum Cuillin Ridge, was superb. We spent a bit of time on the bird sanctuary island of Canna (211m), Charlie watching the seabirds and Derek seeking out the Punishment Stone, where unruly islanders had their thumbs wedged into the hole in what is possibly a more environmentally friendly version of hand cuffs.

Then on to the cliff edges of Muck’s highpoint Beinn Airein (137m) and the Small Isles finale the climb and scramble to the top of the incredible and unique Sgurr of Eigg for truly fantastic views over the other Small Isles and across to Skye and Ardnamurchan. Is that Katie we can see over there teaching Fritz the Dashie to belay?

Back to Skye via Mallaig with a quick ascent of the flat-topped summit of Dun Caan the high point of Raasay and a sensational view. On the way down we thought we heard Ant Middleton bellowing ‘Welcome to Hell’, then we saw Katie Price and Joey Essex rappelling down a cliff whilst discussing the finer points of skinning a rabbit. We thought it a bit strange until we realised we had photobombed the next episode of Celebrity SAS Who Dares Wins.

On the Raasay ferry back to Skye we noticed the waft of Cuillin Cookies from The Boathouse so went to see if Adrian and Bridgette had the coffee pot on. Fortified by cookies we hopped the tide to Oronsay before dropping into the Munro Bar for a massive plate of Elinor’s amazing seafood linguine with wild garlic and local seaweed freshly foraged that morning. After a very comfortable night at the Taigh Ailean Hotel we headed down to Glen Brittle and met Adrian with a copy of his new book, Skye’s Cuillin Ridge Traverse, and we all started climbing at dawn.

After Skye we will continue island bagging down the west of Scotland and the rest of the Inner Hebrides.

Method of travel – climbing a ladder up the apple tree in the garden; step ups on a Belfast sink; indoor staircase; and the hallowed stairs to the Munro Bar of the Taigh Ailean Hotel, Isle of Skye. 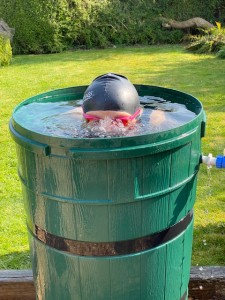