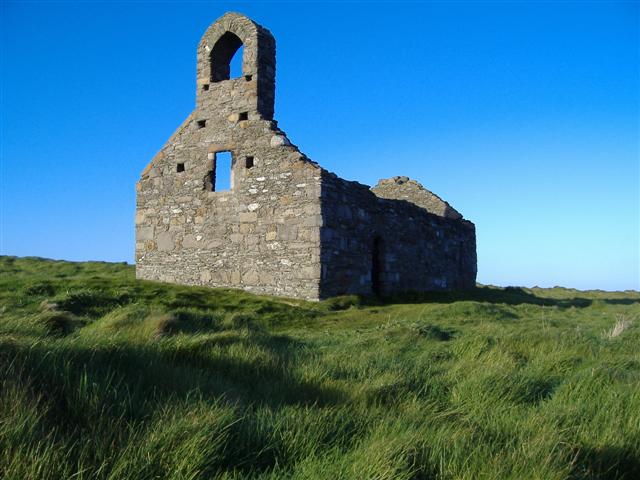 St Michael’s Island, or Fort Island, is worth the trip for its remote beauty and wildlife and to see one of the best viewpoints in the Isle of Man; the views extend across the bay to Derbyhaven, along the coastline to Santon Head and west across the island to Bradda Head. The ruins of two ancient buildings here are also fascinating to observe. The older building is a stone-built, Norse-Celtic chapel, dedicated to St Michael and dating from around the twelfth century. It is now roofless and consists of just four walls and a bell turret. The other building is a fort that dates from 1645 and was built during the English Civil War to defend Derbyhaven, which was then a major port, from the forces of the Parliamentarians. Towards the end of the eighteenth century the fort served as a lighthouse. The island is the site of two great battles for the control of the Isle of Man in 1250 and 1275, when England, Scotland and the Manx were fighting for control of the island. The Manx won the first battle, but they lost control to Scotland in the second. Today the island, which has a high point of seven metres, is a sanctuary for birds and other wildlife, including seals. The buildings are closed to the public, though there are a number of walks which allow visitors to explore the surroundings. The island lies to the east of Derby Haven Bay and is approached by road via Langness and accessed by an extremely narrow road along a causeway. Photo credit: “St. Michaels Isle Chapel, Isle of Man” by kevin rothwell is licensed under CC BY-SA 2.0. 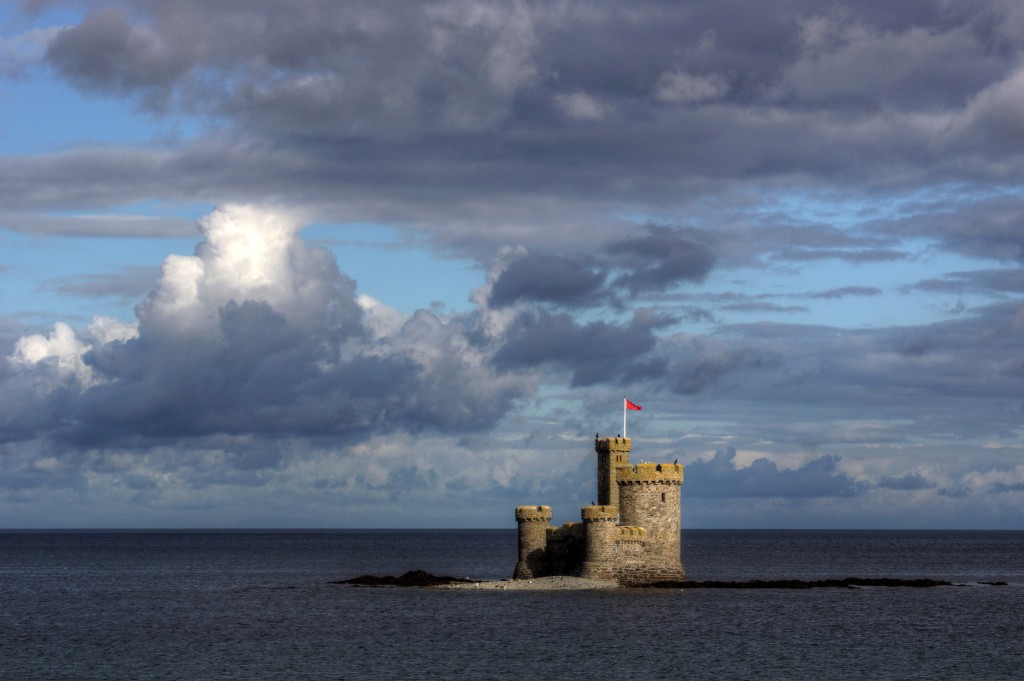 At high tide you’ll see the fortress-like building known as the Tower of Refuge rising directly out of the sea across Douglas Bay; at low tide you’ll see the long, menacing reef of rock, known as St Mary’s Isle, or Conister Rock, on which this structure is built. The tower had no military or defensive function and was built to indicate the presence of the dangerous reef below and to provide shelter to the crews of the many vessels that were wrecked nearby. The best-known wreck was that of the St George in 1830 when the Douglas lifeboat rescued all on board. William Hillary, who lived in Douglas and was the founder of the RNLI, was a member of the lifeboat crew that rescued the crew of St George. Afterwards, he had the idea of building a refuge on Conister Rock. Today the tower is owned by the RNLI, and proudly flies their flag. It is possible to walk to the island, which has a high point of four metres, from Douglas on low spring tides. Photo credit: “tower of refuge, douglas, isle of man” by mariusz kluzniak is licensed under CC BY-NC-ND 2.0. 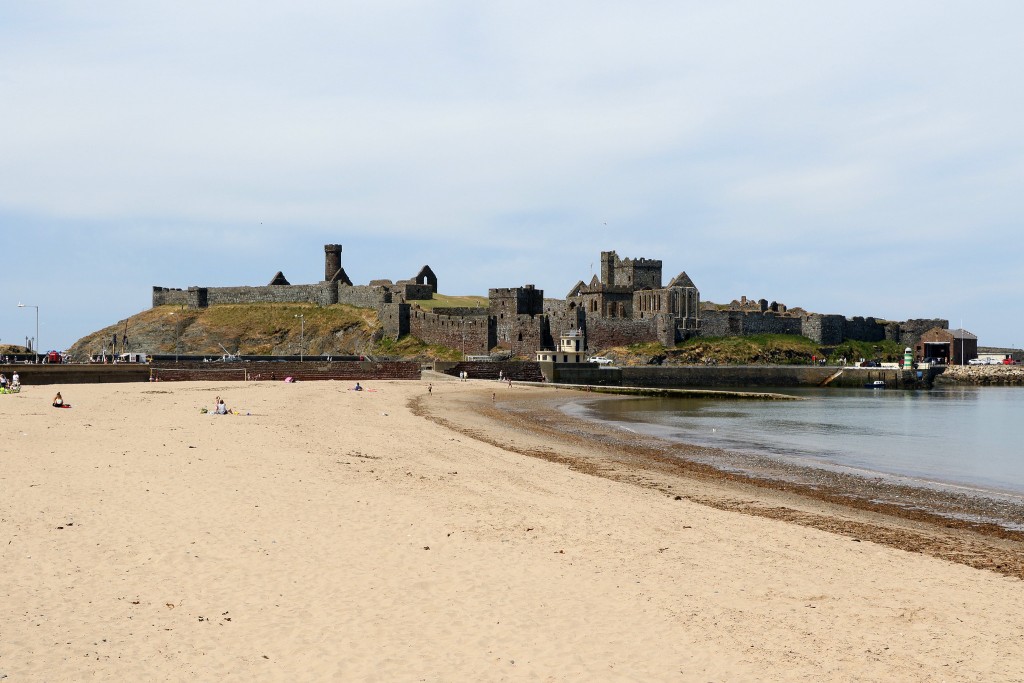 Outside Peel Harbour and linked to the mainland by a narrow causeway, the rocky St Patrick’s Isle, which has a high point of twenty metres, is home to Peel Castle. The island has sheltered Christian missionaries, Viking warriors and kings, while the castle has been a royal residence, centre of government and military stronghold. Constructed originally by the Vikings in the eleventh century, the castle is an impressive feature and its extensive grounds and ancient ruins are fascinating to explore. Listen out for ‘Moddey Dhoo’, a black dog with fire-red eyes that is said to roams the halls, and for the old tales of the site being a possible location of the Arthurian Avalon. Seals and basking sharks are often spotted along the coast nearby. More information here. 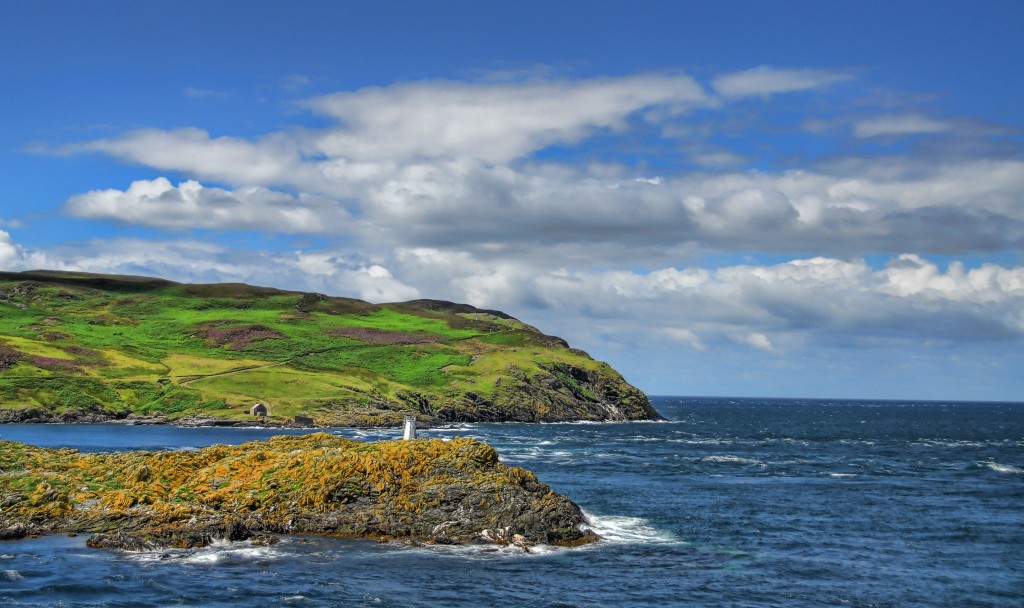 Located off the south-west tip of the Isle of Man, the Calf of Man is an island famed for its rugged wild beauty and birdlife. Owned by Manx National Heritage and managed by the Manx Wildlife Trust, the island has been a bird observatory since 1959 with wardens resident from spring to late autumn. Around thirty-three species of bird breed here annually and it is located on one of western Britain’s major migration routes. Breeding seabirds include Manx shearwater, kittiwake, razorbill and shag. Other species normally observed on the island include peregrine falcon, hen harrier, chough and raven. The island has a high point of 128 metres. The Calf has an interesting history and evidence of the once thriving community includes the two lighthouses built in 1818, a recently decommissioned modern lighthouse building built in 1968, a mill and a smithy. Signs of earlier habitation of the island range from prehistoric worked flints and early Christian graves, through to defences dating from 1651 until 1713, such as the gun emplacement on the Burroo. The bird observatory has space for up to eight visitors in basic self-catering accommodation which can be booked through Manx National Heritage. Boat trips to the island leave from Port St Mary and Port Erin. More information here.

Photo credit: “Calf of Man” by dailyjoe is licensed under CC BY-NC-SA 2.0. (Calf of Man in background) 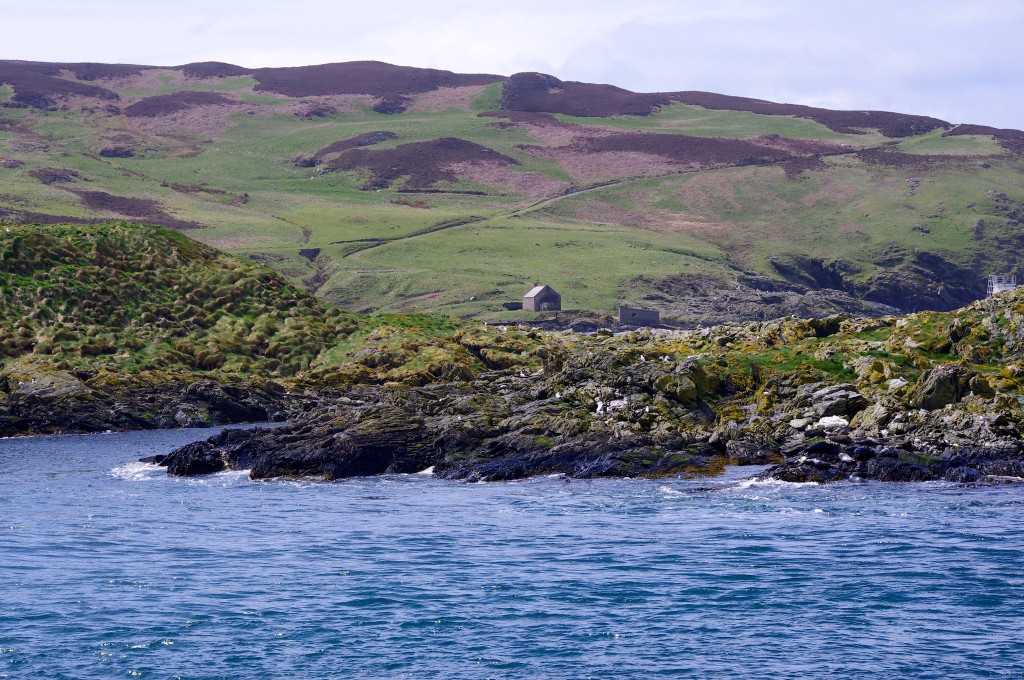 Sitting between the Isle of Man and the Calf of Man in Calf Sound, this Manx National Heritage-owned islet is full of bird and marine life. There are several stories linking the island with Celtic mythology, and with the Vikings, including the death of the Norwegian Baron Kitter, but today it is best known as a hotspot for seal spotting on the wildlife watching boat trips from Port Erin. Photo credit: “Kitterland and The Calf of Man” by Dave Hamster is licensed under CC BY 2.0. (Kitterland in foreground) 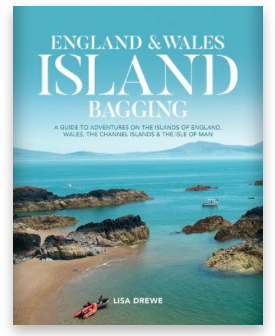 Next adventure?
Older post - What Food to Try on the Isle of Man