Inhabited since Neolithic times the imprints of history on this island tells a tale of the famed Vatersay Raiders, shipwrecked souls and aviation tragedy. 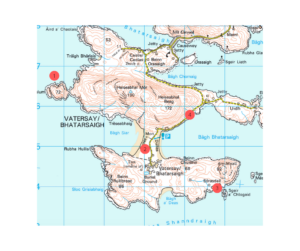 1. Bioruaslum – a tiny islet on the west coast which is accessible at low tides to view the Neolithic walled fort. Defended on the landward side overlooking the narrow isthmus that links it to the main island by a 3 metres thick arced wall wall that rides up the slope from its base on the rocky shore. There are about eleven circular structures between  and an oval pen, immediately to the rear of the wall along the edge of the cliff on the south flank of the island – they may be relatively modern pens, or older huts. 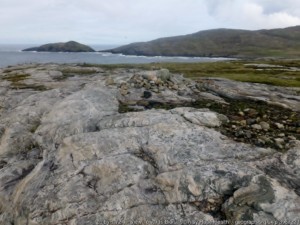 2. Memorial to the Annie Jane – who broke up on the rocks offshore in a storm on her voyage from Liverpool to Quebec in 1853 with the loss of 350 souls. Most of the men, women and children had hoped to escape poverty and famine by starting new lives in Canada. Passengers included emigrants from Ireland and Scotland, children from London, Swiss missionaries and engineers from Glasgow on their way to build railways in Canada.

The Annie Jane was a three-mast wooden merchant ship carrying a heavy cargo of iron. It was on its second attempt to cross the Atlantic after bad weather had previously resulted in the crew turning the ship back. The captain tried to bring the Annie Jane into more sheltered waters in Vatersay Bay but ran onto rocks and was swept ashore in three parts.

The wrecking had a big impact on Vatersay and neighbouring Barra. Both had been affected by recent Clearances and few lived on the islands and resources were scare. They managed to feed and look after the survivors but there were not enough resources to make wooden coffins for the dead.

Its wrecking also had impacts throughout Britain, Canada and Switzerland and left its mark on the life of the nation by establishing the practice of public inquiries following major incidents. 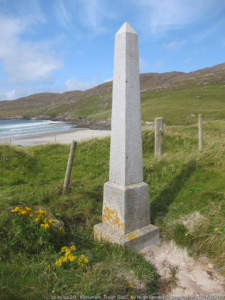 3. Ruins of Eorasdail – a settlement first established in the 1900’s by desperate people from the neighbouring island of Mingulay when life there became unsustainable. Known as the Vatersay Raiders, the Mingulay cottars (people without land) were soon joined by others from Barra and they inadvertently became the cause celebre for land reform in Scotland. The island’s absentee landlord took them to court and the Raiders were initially jailed but public outrage persuaded the authorities to purchase the island and divide it into crofts. Eorasdail was occupied until the 1970’s and many proud relatives of the Vatersay Raiders still live on the island today. 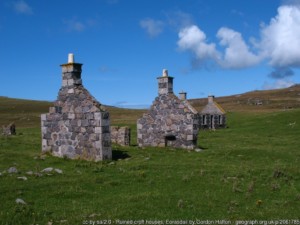 4. Catalina plane wreck –  the rusting remnants of a flying boat lie scattered near the site of its fatal crash along the island lane between the tombolo and Uidh. The flying boat, built by the Americans in the 1930’s and 1940’s, was a long-range patrol plane that could land and take off on the sea.

This plane was being used by the RAF during WW2. On the night of 12th May 1944 the plane took off from Oban with nine crew on board for a training exercise. They became disorientated over Vatersay and the pilot tried in vain to gain altitude but crashed into  hillside of Heishavel Beag. Three of the crew were killed and six survived the crash.

RAF recovery teams later broke the plane up and dragged the wreckage down the hill. They didn’t move it far before leaving the fuselage to rest near the road. A memorial to those that lost their lives stands close to the wreckage. It is thought that the pilot, Flight Sergeant David Clyne, was also an international footballer before the war.

You can freely access the wreck from the road side and walk down to where the wreckage lies. A paved path leads down to the memorial stone. 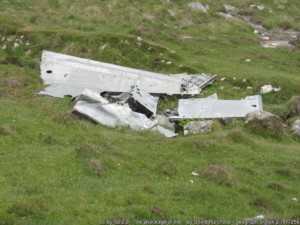 The round-island coastal route and full details of Vatersay’s top attraction are included in the book Islandeering: adventures around the edge of Britain’s hidden islands.

We have a lot of fun here, as we continuously find new islands and meet plenty of great folks along the way. Join our community to get new routes and adventures, latest blogs and news by using the email box below. Tune in also to our Facebook and Instagram pages to see where we are going next.