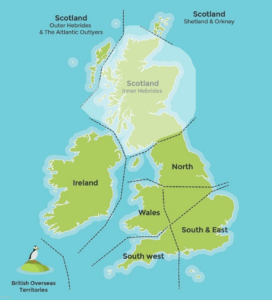 These islands are unique in the world, some are even otherworldly. They are all natural wonders, with mind-blowing history, booming wildlife and the warmest and friendliest communities that you’ll ever likely encounter.

Beauty, chaotic landscapes, simplicity, serenity, wildness, rawness, lip-smacking local food, colourful festivals, traditional music, sturdy ferries and a way of life dictated by the forces of nature and not the hands of the clock – every island is as remarkable as it is distinct. Even hopping over a short stretch of water you can’t presume to know what the next island will bring. Each shaped by grinding glaciers, tumultuous seas, mountains, climate and a complex social history that spans from the ancients to the current proponents of independence.

There are over 790 islands here with 95 or so that are inhabited. For simplicity we have grouped them into the West Coast and Inner Hebrides, the Outer Hebrides and Atlantic Outliers, Orkney Islands and Shetland Isles.

It’s impossible to write a summary but here are a few of the highlights of the ones we have reached so far.

The West Coast and Inner Hebrides
Within a short distance of the densely populated Glasgow are a number of islands that guard the Clyde as it exits to the sea. Bute, Arran and Great Cumbrae are perfect settings for some stunning cycle rides amongst the rich mountain and seascapes that surround them.

Further ‘oot’ lie the Mull of Kintyre, the Firth of Lorn the Small Isles and Skye. It’s here that the diversity of the Scottish islands really start to hit you. These are the islands of myth and legend.
For many, the majestic islands of Islay and Jura are better known for their whiskey than their wildlife. The real island connoisseur though knows them for their sheer and utter beauty. You’d think they would be hard to beat yet Mull and Skye, the islands where the mountains meet the sea, are real contenders. They are breathtaking.

There are plenty more challengers though. These are perhaps not so well written about which makes discovering their secrets even more satisfying and the very essence of islandeering. A firm favourite is Colonsay along with its adjoining tidal island of Oronsay. They are fun to get too with the ferry often touching the giant jacuzzi of the Corryvrechan, a whirlpool that is one of the great natural wonders of the world. Then there is the sister islands of Tiree and Coll. One is the island below the waves and the other is a land of rocks and peatbogs, separated by the thinnest of Sound’s which makes for a great spot to see basking sharks, Minke whales and dolphins.

The Outer Hebrides and Atlantic Outliers
These are the islands where you’ll truly experience was ‘Outer’ means.

This 100-mile necklace of islands sits at the very edge of our nation. Their west coasts stand up to the rolling Atlantic Ocean, its breakers losing energy on their powder white beaches with the boundary between land and sea marked only by a green strip of machair forming the three-coloured stripes symbolic of the Outer Hebrides – turquoise, white and green.

The uniqueness of visiting these islands is the journey along them. It means jumping on ferries and sweeping over causeways to travel the chain and visit the charms that each island offers.

Starting at the southerly tip Vatersay makes for a breathtaking initiation to the wonders of these islands followed by Barra and its unique airstrip and the calm waters of Castlebay with one of the most beautiful castles in Scotland as a backdrop.

Moving north Eriskay offers true isolation and wilderness and presents one of your greatest navigational challenges. It’s every bit worth it though with its golden eagles, wild ponies and playful dolphins. It’s the gem of the Outer Hebrides and one awesome place to swim.

The watery island of North Uist offers a couple of satellite islands the most talked about of which is Berneray; its seascapes are so stunning that the Thai tourist board used them to promote their own beach resorts. Say no more.

Onto Harris and its heather-clad mountains and some of the most spectacular beaches in Britain. Harris is also the jumping off point other islands and you could quite literally spend a life-time exploring them.

Orkney Islands
Only separated from the Scottish mainland by ten miles of the swirling Pentland Firth this archipelago is a world apart.
Orkney is exceptional. Its rich past has bestowed upon it the densest concentration of prehistoric monuments in Britain and its previous Norse sovereignty has left many a trademark. More recently the sheltered waters of the remarkable Scapa Flow were home to The Fleet during the second world war leaving relics galore scattered over each of the islands.

The Orkneys have a thriving economy derived from agriculture and the North Sea oil industry as well as tourism. Its rich capital, Kirkwall, is the gateway to the islands with cathedral, its efficient network of Orkney Ferries and an airport.

Whether spotting climbers scaling the Old man of Hoy, exploring the old war buildings on Flotta, eating crab or watching puffins on Westray, cuddling the tiny last great auk statue on Papa Westray or listening to Billie Muir’s stories of 45-years as a lighthouse keeper on North Ronaldsay – you’ll be astounded by what the Orkney’s have to offer the walker, cyclist and visitor alike.

The islands of this archipelago form the most northerly point of the British Isles. They are bleak and beautiful. They are populated by the warmest of people. They are stacked with the wildest of wildlife. They feel more Scandinavian than Celtic. They are oh so peaceful yet are hotspots for the best of traditional music. The fact that they are home to the Up Helly Aa Viking festival says it all really.

Whether you are in the otter capital Yell or watching the Orca’s hunt at Sumburgh Head, photographing puffins on Fetlar or escaping the Skuas on Unst, walking and cycling around the Shetland Islands is a very real wildlife extravaganza.

Although miles away from the densest populations of Britain all of the Scottish Islands are remarkable in their own way. They are a joy to travel to and they are a joy to travel around. I haven’t mentioned the weather but that one is up to you. Choose your moment and transport yourself to some of the most beautiful places on earth.