A lovely bike ride from Beaumaris on B-roads and quiet lanes to visit Penmon Priory to enjoy the scenic beach and great cafe at Penmon Point. Penmon Priory’s history stretches back to the sixth century when a monastery was established here by St Seiriol. All that remains of this era are stone walls, thought to be part of St Seiriol’s Church, which could be the oldest remaining Christian building in Wales and the enchanting holy well, with reputed healing properties. The Priory, the ruins of which can be seen today, was built on the site in the 13th century when it became part of the Augustinian order. Inside, an impressive medieval stone cross is on display. Close to the Priory the huge 17th century Penmon Dovecote, likely built to house pigeons for their meat and eggs, marks the start of an unmarked track that leads down to the shingle beach and substantial remains of Flagstaff limestone quarry which provided the mortar for Liverpool docks. 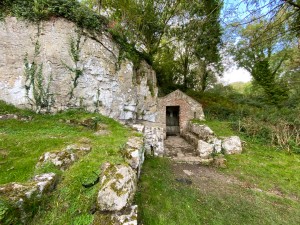 Penmon Point can be reached along the toll road from the Priory (or via the Anglesey Coast Path if wlaking). It is wild and rugged with the Trwyn Du Lighthouse perched on a rocky outcrop at the east end of the pebble beach and the seabird-packed Puffin Island beyond. During the day, dolphins and porpoise may be spotted hunting for fish in the tidal race just offshore and seals haul out on the rocks around the Point. At night, in the right conditions, the northern lights can be seen off the Point. A seasonal spectacle is to watch the blue glow in the water of bioluminescent algae that emit light when disturbed. The beach is good for sea angling and rock pooling. The Pilot House Café just above the beach is a great pitstop with toilets.

Other things to do in Anglesey:

Nearby islands: whilst you are there why not explore: