We have finally climbed all of the high points of the islands of the British Isles. On this final leg of our virtual trip we bagged the islands along the north-west coast of England, the whole of Wales, then hopped over to Ireland and bagged the lot. It has been a blast.

Starting off in north-west England, there are three main groups of islands. We bagged the Furnace group first enjoying the newly opened England Coast Path around Walney Island; a knighting ceremony and plenty of ale at the Ship Inn on Piel Island; and a walk out into the surreal sands of Morecambe Bay from Foulney Island. A little further south, near Ulverston, we met Ray who is the Queen’s Guide to the Sands and waded across the Leven’s channel and across the quick sands of Cartmel Sands to Chapel Island (fighting our way through the undergrowth to reach its highpoint). Derek was mighty impressed by Ray’s ability to catch flatfish with his feet on the return river crossing.

Then on to Liverpool and West Kirby, the departure point for Hilbre Island and the walk across the tidal sands of the Dee Estuary. What a spot for a picnic on the island – surrounded by wilderness yet only a short hop from a metropolis. Back to Liverpool and the ferry to the Isle of Man, where we climbed Snaefel (621m) and spotted loads of Rhisso dolphins on our return.

For the first time in this trip we started to island bag Wales. We’d really been looking forward to this. First up Anglesey and Mynydd Bodafon (178m), then Holy Island and Holyhead Mountain (220m), followed by all of the fabulous islands of the south coast including Llanddwyn, once home to the patron saint of lovers in Wales.

Once back on mainland Wales we travelled the north coastline, island bagging as we went. First up the ancient Holy Island of Bardsey Island, said to be the resting place of 20,000 saints and where Merlin is buried. Around Porthmadog, we loved the uninhabited islands of Ynys Giftan and Cei Ballast – the latter built from rocks used as ballast on the return leg of delivering Ffestiniog slate around the world. Both islands had the deepest, bluest natural swimming pools that were perfect to dive into after a full day of island bagging – the other highlight of course was a quick sup at the Purple Moose Brewery, right on the islands doorsteps.

Onto Pembrokeshire and the three-peaks of Ramsey Island and the bird islands of Skomer and Skokholm before reaching the monk’s island of Caldey Island. A beautiful and tranquil island where we lost Charlie for a while – when he returned he said he’s gone to heaven! It took us a while to realise he’d been in the Abbot’s kitchen surrounded by the island’s famous chocolate and fudge.

We finished off Wales in Flat Holm Island and Sully Island, where we had to wait in the Captain’s Wife for the RNLI’s traffic light to go green before we could safely venture across to the island on the seafloor of what is the second highest tidal range in the world.

Now for the final leg of our journey – island bagging Ireland. I only describe the main islands here, but rest assured we bagged the high points of every island in Ireland on our trip.

After a smooth crossing on Irish Ferries we immediately left Rosslare for the quaint village of Kilmore Quay and a kayak out to the Saltee Islands – followed by supper at the Saltee Chipper for one off their legendary Fishboxes – cod bites, Tempura prawns, peppered squid and the best chips in the world. Then onto the wonderful Cobh, Cork, for a trip out to the fortified Spike Island where Derek had to be released from the wooden stocks and refused to share the historic prison cells with the other children.

Now for the highlight of the trip – the Wild Atlantic Way along the west coast of Ireland. First up Sherkin Island and its incredible beach at Silver Strand, and Cape Clear Island with great views of Fastnet rock from its peak. Then, after a lively evening in Ma Murpheys in Bantry, the fabulous gardens of Garnish Island and the exhilarating cable car ride above the cliffs to Dursey Island where the highpoint was shrouded in mist. We can highly recommend the Dursey Deli for monkfish and chips, we reckon it’s probably the best outdoor chipper in Ireland.

Luckily the Force was with us on our journey The Skellig Islands, Co Kerry, and the boat trip was calm. A UNESCO World Heritage site, these islands were Skywalker’s retreat in Star Wars: the Last Jedi and The Rise of Skywalker.  We were amazed to see the real ruins of six beehive cells, two oratories, several stone crosses and a medieval church – well they did look real in the films but I had just thought it was a well-built stage set. Back to nearby Valentia Island and some incredible views from its high point and the added bonus of being able to drive to the peak.

Now the Dingle Peninsula is one of my very favourites, as is a night out in its namesake town. Feeling a bit bleary-eyed after a sing-along at Foxy John’s it wasn’t a great start to what is always a rough crossing to Great Blasket Island, the final stop across the Atlantic before reaching Newfoundland. The views from the high point were well worth it though – we are talking about seeing the curvature of the earth.

Heading north we bagged the Aran Islands, Co Galway, the most populated and beautiful island with some of the oldest archaeological remains in Ireland – including Teampull Bheanáin (one of the world’s smallest churches). Moving up a county to Mayo our next island stop was an island steeped in pirate legend, Clare Island and a climb of Knockmore Mountain, then on to Co Galway and Inishbofin Island with its thousands of seabirds, wild swimming, diving and walking.

I enjoyed the break from the rough Atlantic to simply cross the bridge to Achill Island, once the terminus for a railway line that had a prophecy of death and a rather dark history. We moved swiftly on to Tory Island, Co Donegal. Known as Ireland’s most remote inhabited island, Tory Island is also has its own King who made a special effort to come and say hello when we landed.

We had been spoilt with islands along west coast Ireland and so were surprised to find very few along the north coast. The only inhabited island off Northern Ireland is Rathlin Island, Co Antrim, which is an incredible spot for seabirds. Oh and close-by we crossed the rope-bridge across to tiny Carrik-a-Rede Island where Charlie did his usual and made it swing wildly to scare the life out of me as we crossed.

Finally, we headed down the east coast of Ireland bagging the few islands as we went. It seemed fitting to end our epic island bagging Britain trip on the high point of Ireland’s Eye, with its 28 climbing routes and right on the doorstep of Dublin.

Overall our virtual island bagging Britain journey has been an incredible experience. We have now climbed the equivalent height of all the island high points in the British Isles. I am indebted to Derek and Charlie for going out in all weathers to climb ladders run up hills, step up stairs and on Belfast sinks to achieve this phenomenal height gain and challenge. We have turned lockdown into a massive achievement and I have thoroughly enjoyed every moment of it. Thank you what a team. 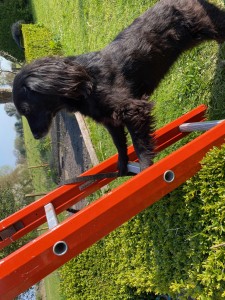 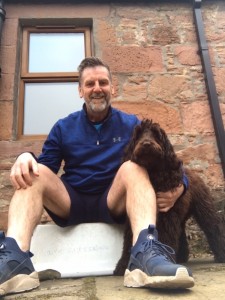 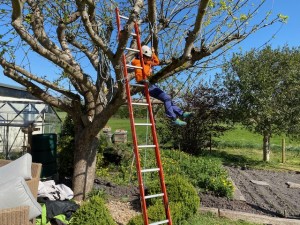 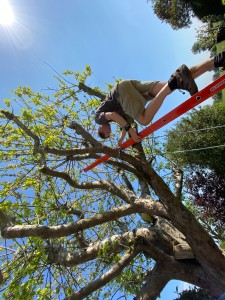 Newer post - Best Coast Campsites in England – on an island
Older post - Blue Space: Where can you be near water?