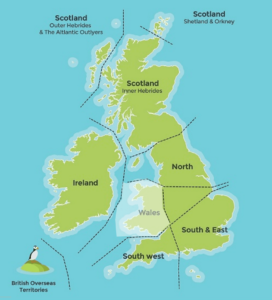 If you want drama, beauty and incredible bird life then look no further than the islands of Wales.

These exhilarating, fascinating islands reveal their true self only to those prepared to master the tides, explore the windswept foreshores, scramble up rocky cliffs or walk across awe inspiring bridges and walkways. They offer stunning wild beaches, historic detail that goes so far back it’s almost impossible to imagine and people who have an incredibly deep sense of place and time rooted in their souls.

Starting in the far flung corner of Wales, Anglesey itself would take a lifetime to discover. Known as the ‘Mother of Wales’ it certainly feels like it has spawned the smaller yet even more beautiful islands of Holy Island, South Stack and Llanddwyn and Cribinau along with many more uninhabited island just a stone’s throw away from her shores.

Separated from the mainland by the Menai Straits Anglesey has left its own stepping stones back to the mainland via several small islands that sit in the raging currents that are fantastically named ‘The Swellies’.

Truly out on a limb Bardsey Island sits off the Llyn Peninsular. The boat trip over is a real delight with Colin a bone fide islander and his opening salvo of skilled tractor manoeuvres on the beach to get you waterbourne.

Then in the shadow of the majestic Snowdonian mountains two complete surprises in the salt creeks and extensive sands of the estuaries near Portmerion. Cei Ballast and its whirlwind tour of the geologies of the world and Ynys Giffton with its ice-smoothed rocks and sun-warmed natural pools ideal for an exotic swim.

Ynys Lochtan in Cardigan Bay is not to be missed. Access is not for the faint-hearted though. For those who love a bit of a rock scramble you’ll likely be rewarded with the smiling faces of the Cardigan Bay dolphins as they glide past immersed in their own world.

I haven’t mentioned the rich historic soup in which the Welsh islands are a key ingredient yet. There is so much to tell yet one constant thread is the religious role they played. Caldey island is probably the most well known in this respect. Here the serenity of the monks still everything around them and the gorgeous vistas are hypnotic.

After this experience heading back to the colour and bustle of the lively Tenby can be a bit of a shock to the system but don’t forgo the opportunity to visit St Catherines if the tide is right. An imposing Napoleonic fort in the throws of being restored. Now a private island it’s a great place to visit or join a party on one of the many themed nights.

Ramsey and Skomer on the other hand are wild cannot be called serene with their swirling noisy birdlife. Mew, keow or ha-ha-ha-ha is the common language here. Ramsey is called home by one of the largest populations of Manx Shearwaters in the world. Get a good day’s rest and you can spend all night watching these characterful birds emerging from their burrows and preparing themselves for their arduous flight to Argentina.

Not to be beaten Skomer is a mecca for puffin fans who are prepared to brave the often heaving seas to spend time with the ‘clowns of the sea’.

Middle Head, Mumbles Head and Worms Head are all ex-headlands and walking to them certainly makes you feel like you are walking right out into the sea and then some. All readily accessible from the mainland yet raw, natural places to be.

As we finish our sweep along the wild coastline of Wales back towards the Severn, the islands of the Bristol Channel couldn’t provide a greater contrast. Flatholm and Sully feel like they are surrounded by life on the south coast of Wales and the North coast of Somerset and Devon. Sitting in the swirling, brown water of the Bristol Channel they must surely be amongst some of the most looked at islands there are that people yearn to visit but rarely do. They are missing a treat.

The islands of Wales – what are you waiting for?