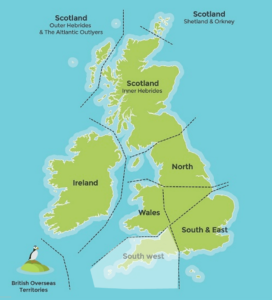 Ready for a big slice of adventure? Well you’ll get it in the South West. The coastal counties of Dorset, Somerset, Devon and Cornwall present the intrepid islandeer with huge opportunities for exhilarating boat rides, pristine castaway beaches, lush sub-tropical gardens and enough gourmet food to make you drool.

Not all of the islands are a piece of cake though – either to get to or to circumnavigate. To meet the challenges of the Southwest you’ll have to be prepared for a few adventures. For the islands that reveal themselves only to the more intrepid explorer you’ll have to be ready to pick your days for the most comfortable boat rides, know your tides, be willing to hike up a few steep sides with a good head for heights and mind the gulls. That said of course there are plenty of islands here that make life a bit easier for the islandeer – in fact some of them are rather sophisticated

Here’s the Southwest’s islands in a conch-shell

Dorset’s island gems are Portland and Brownsea. Portland offers large, visible chunks of its fascinating quarrying history that provided the stone that built some of the world’s greatest buildings. It reveals tantalising glimpses of its strategic past accommodating the Navy in one of the largest manmade harbours in the world. In more recent times it has transformed itself into an exciting sporting venue after hosting the 2012 Olympic Games. Brownsea on the other hand sits tranquilly in Poole harbour and is home to the famous red squirrels as well as the birthplace of scouting and guiding.

Heading north to Somerset we find one of the many dichotomies encountered on our travels. Despite being famous for its Levels, Somerset is home for one of the UK’s steepest islands, inventively named Steepholm. Accessed only via a thrilling rib-ride from Weston and then a lung busting ascent up its vertiginous cliffs your reward is one of the most panoramic views of the Bristol Channel possible.

Further west, along the Bristol Channel and now in Devon, Lundy offers some of the most engaging wildlife experiences in the South. Swimming with the seals that thrive in one of the country’s first marine reserves and watching the comical puffins are an absolute must for any intrepid islandeer.

On to Cornwall, the land of the Atlantic rollers and achingly beautiful beaches. These islands are sure to delight. From the genteel Looe island and its story of two sisters living the dream to St Michaels Mount with its spectacular castle and tumbling gardens clinging to the rock face. Then for stunning natural beauty there is Asparagus Island, lying just off of the iconic Kynance Cove. You can’t help but be totally inspired by its large caves and stacks of red and green marble-like serpentine rock that rise from the small sandy strand that reveals itself only at low tide.

Going even further west and falling off the mainland you’ll find the Scilly Isles. The tourist office describes them as ‘a world apart in every way’. It’s a perfect description. You could easily be on the beaches of the Caribbean if the sparkling white sands, the azure seas and the sub-tropical gardens were the only clue to go by. This is the place to come for sheer, unrelenting natural beauty and peace at the outer edges of our nation.